‘Israel to Give Obama 12 Hours Notice on Attacking Iran’

Israel told visiting US Gen. Dempsey that Obama would get no more than 12 hours notice before an attack on Iran, the London Times reports.
By Tzvi Ben Gedalyahu
First Publish: 1/22/2012, 10:19 AM 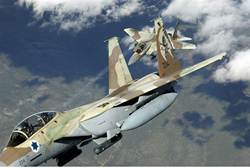 Israeli officials told visiting USS Chief Joint of Staffs Martin Dempsey that it would give President Barack Obama no more than 12 hours notice if and when it attacks Iran, The London Times reported Sunday.

The Netanyahu government also will not coordinate with the United States an attack on the Islamic Republic, according to the report, the latest in a number of suposed scenarios concerning cooperation or lack of it between Jerusalem and Washington.

It is left to speculation whether the rumors are based on facts or are leaked by officials to mask the possibility of secret military coordination.

The London Times said its sources explained that that Israel fears that President Obama would try to torpedo an Israel attack if more notice were given because he is concerned that Iran will respond by blocking the Strait of Hormuz, sparking a rise in the price of oil that could cripple Western economies. If the attack were to occur in the next 10 months, it would put President Obama in a tight spot on the eve of his bid for re-election.

President Shimon Peres told Dempsey, “I am sure that in this fight [against Iran] we will emerge victorious. It is a fight that does not belong exclusively to the United States or Israel, but a global struggle to create a safe world for all peoples.”

Dempsey, on his first official visit to Israel, was wined and dined by Defense Minister Ehud Barak and IDF Chief of Staff Benny Gants, who went so far as to arrange an IDF orchestra rendition of song made famous by Frank Sinatra, one of Dempsey’s favorite singers.

Dempsey tried to play down the postponement of what was billed as the largest-ever joint military drill between the Israeli and American armies, involving thousands of U.S. Army soldiers.

Published reasons for the delay have ranged from budgetary constraints, logistical problems to a signal from Prime Minister Binyamin Netanyahu that he distrusts President Obama’s commitment to stop Iran from obtaining a nuclear weapon.

Dempsey maintained that the delay, which was announced by Israel, will give both countries more time to prepare and “achieve a better outcome.”

The top American general left Israel on Friday, before the Sabbath began.